My name is Rachel and I’m a surrogate. It has been 5 days since I peed on a stick. They say the first step to dealing with your problem is first admitting that you have a problem. Maaaaannnn do I have it bad!

Marian has kindly allowed me to hijack her blog from time to time. My plan of slowly infiltrating every little aspect of her life is coming to fruition. I don’t think she’s onto me yet *insert evil laugh here*. When I read Marian’s blog I get the warm fuzzies because how she comes across in her blogs is exactly the same way she comes across in real life. There is an honesty to her posts that is rare to come by these days and I find it refreshing and inspiring, so I feel the need to share the love a little bit more and give the other side of the story. Not that it’s any less filled with cat pictures, squealing at various cute pictures of babies and or puppies and love and admiration.

First disclaimer: I’m nowhere near as eloquent as Marian, so excuse me while I fumble through this post. Second disclaimer: Marian and David are totally rad. How do I know? I just know. For the last 11 years I have been a part of the online infertility community in some way or another. It all started when I decided to donate my eggs. It’s a long story and one I feel I have told almost ad nauseam so I will try and keep it brief for those following at home. I’ve donated my eggs to three couples between 2005 and 2008 and as a result there were three gorgeous girls born from my donation. Did I mention I already have three totally awesome girlies of my own, cause I do!? Then I went onto becoming a surrogate. Why did I become a surrogate? I have no idea, so if you meet me and ask me that question don’t be offended if I just stare blankly at you and shrug my shoulders. Surrogacy has some incredible highs that I feel completely blessed to have been able to experience. As a result I’ve given birth to three gorgeous (if I do say so myself) little boys. With the highs also inevitably come the lows. There have been repeated negative cycles, constant second guessing of myself, heartbreaking miscarriages and devastating break downs in relationships. So again you’re probably asking yourself why? I know I ask myself that same question from time to time. I’ll try to answer it as best I can…..

Every now and then someone enters your life and takes you completely by surprise. If 2015 had one stand out moment for me it wasn’t what I expected it to be. After three agonizing years of university I graduated as a registered midwife at the end of 2014. A long held goal I’d had where I couldn’t see myself doing anything else except helping parents bring their babies into the world every day. You mean I get paid to do this?? Stellar moment right? Sure it’s been more than I expected it to be and work has been incredibly rewarding this year, but still…not my stand out moment. That moment kind of snuck up on me and happened when another surrogate practically threw Marian at me when I mentioned I might want to do surrogacy again. It was Good Friday 2015, the ding of my phone alerted me to a facebook message from said surrogate; I believe the conversation went something like this – “Rachel! You want to be a surrogate again? I know the perfect IP’s. Here…I’ll start a group chat”. And so the chat begun…and over 60 thousand facebook messages, countless hours of emailing (not to mention a few flights across Australia), and an awesome baby making mixed tape in progress, here is my stand out moment of 2015: meeting an incredible couple that are honest, refreshing, genuine, completely lovable, smart, kooky, witty, talented, adorable (should I stop here?? I don’t think there are enough affirming adjectives available to describe them) and man can they cook! All of these words of course don’t equate to how I feel about them, see….for a little while there I became somewhat disillusioned by surrogacy. While I have had two incredible experiences that had their challenging moments, but ended with outcomes that changed me and have helped me become the person I am today (which I hope is somewhere around the decent human being stakes), I have also had some moments where I questioned why I wanted to continue to be part of the surrogacy community and why on earth I would ever want to be a surrogate again. There were times when I felt that I had put so much of myself out there for others that I didn’t really know who I was anymore and in amidst those feelings I had lost so much of the passion I had surrounding that which drove me to become an altruistic person in the first place; namely to help other people. The drive to become a surrogate again wasn’t initially driven by the desire to help someone else, but merely because I felt like I had one more in me, so why not? Needless to say that by the time Marian was thrown at me I was beginning to wonder if there was any IP that I would get that gut feeling where I knew unequivocally that they were meant for me and I was meant for them (cue sappy romantic music….maybe some Celine Dion…she does love songs right?). And so a great romance was born…..Marian is the woman of my dreams; in a completely heterosexual way. When we emailed and messaged each other it was easy to forget that we had thoughts of surrogacy in mind simply because we lost ourselves in general conversation and I found myself wanting to know her whole life story, her likes and dislikes, which male celebrity was by far the sexiest (I’ll give you a hint…his name is Chris), and what are you having for dinner tonight? And oooohhhh…that’s right, you need a surrogate to have a baby? Well guess what – I totally have a uterus that’s currently vacant! Want to populate it? 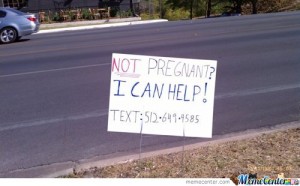 Could I have been more obvious?

Back to the second disclaimer – Marian and David are totally rad because they have reignited a passion in me that reminded me of who I was and why I want to help people. The amount of gratitude I have to them for that is staggering. I keep saying they are refreshing because in a sea of people that needed the help of a surrogate Marian found me, and not just in a way where – oh hey there you are, lets become friends and maybe make a baby….I feel like she found me floating on the remnants of the broken titanic after Jack had frozen to death and quietly slipped to the bottom of the sea. Ok – maybe not that dramatic, but for visual effect it will do. Marian’s honestly and respect to be completely open with me about how she is feeling be it good or bad is what makes her rad. David’s quiet unassuming wit and ability to send me bad glamour pictures out of the blue to show his support and friendship is what makes him totally rad. Why wouldn’t I want to have their baby? It’s totally a no brainer.

Draw me like one of your French girls Jack

We’re now one cycle down and it wasn’t the outcome we hoped for and we know how Marian handled the two week wait….so how did I fare? I would say my days could drastically swing from – it’s totally cool whatever the outcome to – holy crapballs…..what the hell am I doing?!?! What if it’s negative….what was that twinge? Do my boobs feel sore? I think they feel sore. Is it period sore or pregnancy sore? Why haven’t they made an all seeing crystal ball yet damnit! And then the negative came and I was reminded why surrogacy is hard at times. When you want something so bad for someone else you feel a responsibility towards them to help them get that desired outcome. When it’s your body that is to give them said desired outcome and it doesn’t happen, the ability to feel like your body has failed them is overwhelming. So I cried as much as I didn’t want to because I know that it can take a few cycles to get pregnant, and I know that Marian and David would be ok regardless of the outcome but I cried because I want it so badly for them as I feel like they have given me so much over the few short months I’ve known them. They gave me back something that I had lost – my passion to help someone and the ability to become a better person because of it, therefore it’s natural to be caught up in the moment where you realise the cycle didn’t work and just go with it. Luckily it didn’t last long and Marian has an uncanny knack at making me smile like a goon and coaxing the joy back into my life when I’m not at my best and my husband has the unnerving ability to know when ice cream is needed. We stayed in our little cocoon of disappointment for a while and then we emerged ready for the next cycle.