We’re now officially past the 6 week mark. Honestly it feels like we should be 12 weeks already. Why does time move so slowly when you’re waiting for something?

How have we fared the last two weeks since we officially graduated from PUPO to pregnant? Maybe I should let Marian explain how she has been feeling, although I think the reality is still setting it. I was feeling great until about a week ago when the nausea started, just the odd wave here and there, but then Friday of last week it hit me. The stomach spasms, the watering mouth, the ‘please someone make it go away’ prayers and the only thing that helped was lying down in misery. Luckily I had acupuncture already booked for that day and my acupuncturist used a few methods to help counteract the nausea. He also put in a few specialised temporary needles that last about a week which have certainly helped ease the nausea and calmed my mojo but not quiet taken it away. Luckily it’s currently at tolerable standards.

Although the title suggests I have blown chunks I am not actually a vomitter despite wishing I could at times just so I could have a blissful moment afterwards of feeling normal. So instead I will just deal with the nausea as it comes, and those coping mechanisms include lying down feeling sorry for myself – usually with a good book to distract me, eating small meals, premium crackers mmmmm, salty and when times are tough I resort to pharmacological relief in the form of ondansetron wafers. Sweet sweet temporary relief.

Other pregnancy symptoms I have had include:

I find it really interesting that although I’ve now had 6 babies (and counting) how easily I have forgotten what pregnancy is actually like. I swear that babies are cute for a reason….they do their goo goo and gaa gaa and they look at us with that twinkle in their eyes and their cheeky little grins and all of a sudden our memory of pregnancy (and labour) is wiped, or at least hazed over. Damn those diabolical babies.

Of course having said (and suffered) all of this, I am welcoming every bit of the blah-ness because it means Bear is hanging around and the pregnancy is progressing. It also helps to have the most supportive team members. Hubby even called in sick for me Friday when I was curled in the fetal position wishing the nausea away, now there’s a team member that deserves a raise! Which came in the form of his beverage of choice waiting for him when he got home. My eldest daughter continually asks how I’m feeling and gives me soothing head pats like I’m a cat just to show her support.

Marian and David have also been incredible. It’s hard for me to imagine what it must feel like to know someone is feeling sub-par because they’re carrying your child. I can certainly speculate how that would make me feel and I imagine there would be a fair whack of guilt in there somewhere. There was recently a discussion on one of the groups we are both members of that discussed what people in a surrogacy arrangement can do for each other to make the process more enjoyable or special for the other party. Of course there is a taboo surrounding surrogacy that involves the exchange of money or gifts – basically the surrogate is not allowed to gain financially from the arrangement, so obviously that is a no no, therefore the discussion surrounded non-monetary thoughts and support. For me the thing that makes all the difference is the expression of gratitude and support. A simple card with some heartfelt words on it, the odd text here and there of encouragement and excitement is all I need. Of course Marian being Marian she goes above and beyond and I have since learned she is in cahoots with my husband. I’m not sure how I feel about my husband being in cahoots with another woman, I imagine it’s how he feels when I have other men’s babies so I guess I can’t complain! 🙂

And so a very cheery parcel arrived on my doorstep early this morning. A ‘happy morning sickness and boob expanding’ parcel that included some of my favourite chocolate items, some small cat underwear (for comical effect as we have a cat that doesn’t know how to use a litter tray!) and some carpet odouriser for the same reason, some recycled trashy romance novels that I can only imagine were purchased from the finest St. Vinnies in Adelaide as they carry such titles as “His Untamed Innocent” and “The Executive’s Valentine Seduction”, and the most awesome rainbow coloured pill organiser so now I will never forget to take my multiple daily tablets. Of course all of this came with the most awesome card and it’s not just that I’ve received an awesome gift that makes it special; it’s the time and effort that went into the gift that makes all the difference. 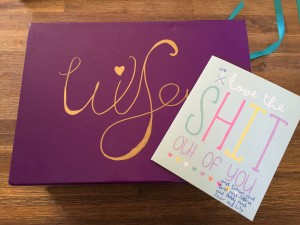 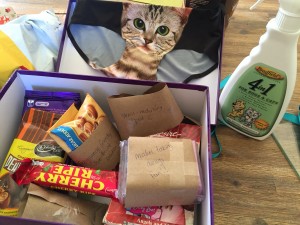 How people show their love varies and one thing I have learned about Marian (and David by proxy) is that they are the most giving people I have ever met. It’s not very often that I meet someone who is as giving or more than I feel I am, which makes me feel even more like I have the most fabulous IP’s and friends ever. There will never be enough words to express the way I feel about them, so unfortunately as our readers you are going to have to listen to me gush endlessly over the course of my blogging, so don’t say I didn’t warn you!

As to whats the next big event for Team Kundaberg – we have our heart beat scan coming up next week, so watch this space!!!