We’re only 10 weeks and I already have 10 outfits per day planned for this child until they’re 18. Oh dear. 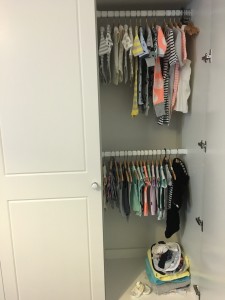 I don’t have a shopping problem. I can stop annnnnnny time I want to…

In other news, hubby and I told our parents. In some ways it was fun, but if I’m entirely honest, I don’t think I was ready for the avalanche of excitement and “our news” all of a sudden becoming “everyone’s news”. I guess this is something to get used to once personal news is in the public domain (I can see the irony in writing this…. I’ve been blogging in public the whole time, but ‘real life’ public feels different).

I really enjoyed the weeks of quiet time that we had while the news was just our special news for the team, our closest support people, and those in internet-land. Now that the grandparents have hold of it it’s at another level! Of course our parents always knew we were pursuing surrogacy and have always been overwhelmingly supportive, but I made the decision that once we started transferring to “don’t call us, we’ll call you”. I am really glad we did, as it allowed us all space to breathe.

Anyway, we tried to surprise them with the updated “news” together as one family when we were all in the same place at the same time (which seldom occurs for logistic reasons); but there’s not much to surprise people with when it comes to surrogacy (unless you’ve kept everyone in the dark prior).

I was a little bit sad that I couldn’t say “Surprise!” in the usual way that people get to when it’s their own pregnancy, you know, you’ve all seen the adorable YouTube videos of people putting a bun in their mother’s oven and watching her reaction. My version would be something along the lines of “Surprise! We found out that I have a series of diseases and after a lengthy period of various consultations and meeting this awesome chick who lives on the other side of the country and going through counselling and legals and a few transfers in a questionably designed chair now she’s PREGNANT!” – doesn’t quite have the same ring to it.

Mum is a clever little bunny and had it all figured out that the news was about to be dropped. She’d told my brother what her suspicions were too, haha. She’d also told all of her friends, and was most displeased when I requested to not make the announcement public until we’d had our 12 week scan. Sorry mum!

I’m having to warm to the idea of it not just being our news now, which initially was a really weird feeling, but I think I’m getting there 🙂 I can only imagine how this must feel from a surrogate’s point of view – if I’m feeling a bit precious about it, imagine having the decision of who to tell and where and when about something to do with your body made by someone who isn’t you? This is one of the reasons why it’s super important to talk to everyone in the team about delivering important news. Really it’s not just the Intended Parents’ news, it’s the team’s news, and I felt honoured to be able to deliver it to our families, even if they’d already guessed it!

2 sleeps until I’m reunited with my lady-love! Can’t wait!

3 thoughts on “Letting the cat partially out of the bag”