It’s been a while since we’ve done an update, the weeks seem to be flying by now. The first few weeks went so slowly. It might be part because I was feeling like poo with morning sickness and general pregnancy related tiredness, or it might be part because we knew that there was a little bear growing in there but the general public was oblivious. Now the cat is out of the bag time seems to be moving somewhat faster. Any my tummy is expanding, sorry to those at work that have to view me in my ever tightening uniform!

A lot has happened over the last few weeks. We have had our first hospital appointment which included a meeting with the hospital’s surrogacy liaison team, we had our nuchal translucency scan (yay for seeing Bear again!), I had a birthday and we’ve made our announcement facebook official! Cause you know no pregnancy is real until it’s been posted all over social media. Oh yeah….and it was Easter 🙂

Our first hospital appointment went well and we even heard Bear on doppler for a split second which was great for not quiet being 12 weeks at the time. Marian flew up for this appointment which was nice because our team was reunited once again and all was right in the world :). We even fit in a sneaky little visit to Brisbane’s Cat Cafe where we indulged our inner cat lady and gooed over all the cute little kitties (the kitties make me more clucky than babies do!). At the appointment I was deemed high risk due to essential hypertension and a previous preterm birth so I was given what seems like a gazillion appointments! Thanks to my genetics I may spend half this pregnancy sitting in the hospital waiting room. As long as Bear is healthy that is all that matters and it also means we will have another scan at 28 and 34 weeks to check blood flow through the placenta as hypertension can cause complications in this area. Another discussion we had was mode of birth. I had three normal deliveries with my own three, however my surrogate births with both cesarean sections which slightly increases my risk of uterine rupture if I were to have another vaginal birth and absolutely rules out an induction of labour. I convinced the doctor that my mind was not yet made up and it was something that I would prefer to discuss after 36 weeks. We were all happy with this decision. The meeting with the surrogacy liaison team also went very well with the hospital being very accommodating to surrogacy pregnancy and birth offering Marian and David an adjoining room to my own post birth, giving Marian as much breastfeeding support she needs through the lactation consultants and basically asking us to just tell them what we would like and they will try to accommodate us.

A few days later we had our 12 week scan which was amazing! Marian and David both flew up for this which made it extra special. We saw a not so tiny anymore Bear on the screen now measuring 65mm! The scan was so clear and Bear was being very co-operative so we got to see just about all parts of it including it’s brain, bladder, fingers, toes and fat little belly. The sonographer also asked us if we would like to know the sex of Bear to which we all replied a resounding no. Personally I was always happy with Marian and David finding out the sex of their baby if they wanted to but I have always liked the surprise of finding out on the day of birth if it’s a boy or a girl. It makes all the hard work of pregnancy worth it. Working as a midwife in birthing we often get couples who know what they’re having, have chosen the baby’s name and often even know the day it will be born due to the amount of inductions we deal with. For me I feel it leaves little surprise at the end of a hard labour or the major surgery that is a cesarean section, therefore I had always decided I didn’t want to know the sex (or even the name Marian and David eventually decide on) until the day of delivery. While Marian initially wanted to know what they were having (and subsequently could have found out at any time due to the embryo being PGD tested), her and David have also decided to leave a little mystery to the pregnancy. And without further ado, their first family photo…. 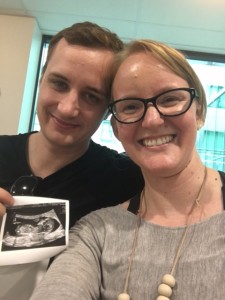 Aren’t they the cutest soon to be parents ever!

After being told that Bear is completely healthy we decided it was time to tell our loved ones and of course social media. This is something I hadn’t really been looking forward to. While I was busting to share the news because it’s something that I find very exciting and I’m proud to be helping Marian and David create their little family, being the third time I have been a surrogate  I have found with each surrogacy, the more my motives get questioned. Being an exciting time I only want encouragement and words of support from those I love, however sometimes that’s not quiet what I get.

I often get asked:

“why would you want to do it again?”

“this will be the last time won’t it”

“surely you must be getting paid if you keep going again”

“surely your husband must be over you being pregnant”

You can imagine this can be frustrating when it’s something that should be celebrated. The first person I told was my mother who was more supportive than I thought she would be. God love mothers whose only concern is your health. Then I told my manager at work as I didn’t want her finding out through the grapevine. She was very supportive and extremely interested in surrogacy. We then told our children with Miss Twelve saying ‘YAY another sibling!’ since in the past I have used my own eggs, however I had to explain that this time the baby would have no genetic link to her. She was unperturbed by that and simply wanted to know when I would take her to the cat cafe (good thing it’s school holidays and my inner cat lady is always up for more visits to the cat cafe). It was then time to make it facebook official! Here’s is where the power of Marian’s Photoshop came into play

And now the world knows there’s a Bear in there! Most of the comments we have received have been overwhelmingly supportive which has been fantastic. Despite this there will always be people who want to offer unsolicited comments and advice to which I wish they would use the THINK acronym 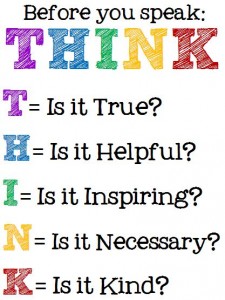 Maybe we should show this to Donald Trump as well?